The Adventure That Went Too Far

The Hollywood Drunks would like to announce the release of their brand new album THE ADVENTURE THAT WENT TOO FAR.  The title is based on a short story by singer/songwriter Eric Winzenried's daugher Lucy Winzenried. The short story deals with the death of Lucy's cat who got hit by a car down the street from their house. Her cat had never crossed the street before but after a late night of partying with another cat was last seen across the street by a neighbor before being hit in the morning.

THE ADVENTURE THAT WENT TOO FAR explores the themes of getting older but not getting complacement. It follows the trail of life while watching your kids, your relationships, your dreams, your friends, and even your own parents progress down that same final timeline. Songs such as "DYNAMITE" and "HOURS TILL MORNING" focus on powering through the absurdity and cruelty that life throws our way while "THAT'S THE JOKE" deals with the fraility of preserving relationships. In the autobiographical song "2 SISTERS", Eric recounts the tragic death of his sister at the age of 12.

Once again, the music itself is a synthesis of different genres including hip hop, pop, rock, glam, reggae, folk and alternative. This eclectic nature is symbolic of life. However, these songs all share the same universal message: Life is short, precious, absurd, and beautiful in the same breath so don't let it pass you by while your asleep.

Videos from THE ADVENTURE THAT WENT TOO FAR

Order your copy of The Adventure That Went Too Far on iTunes! 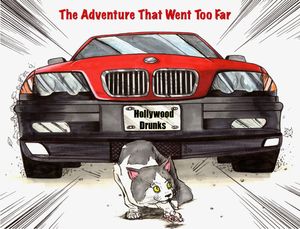